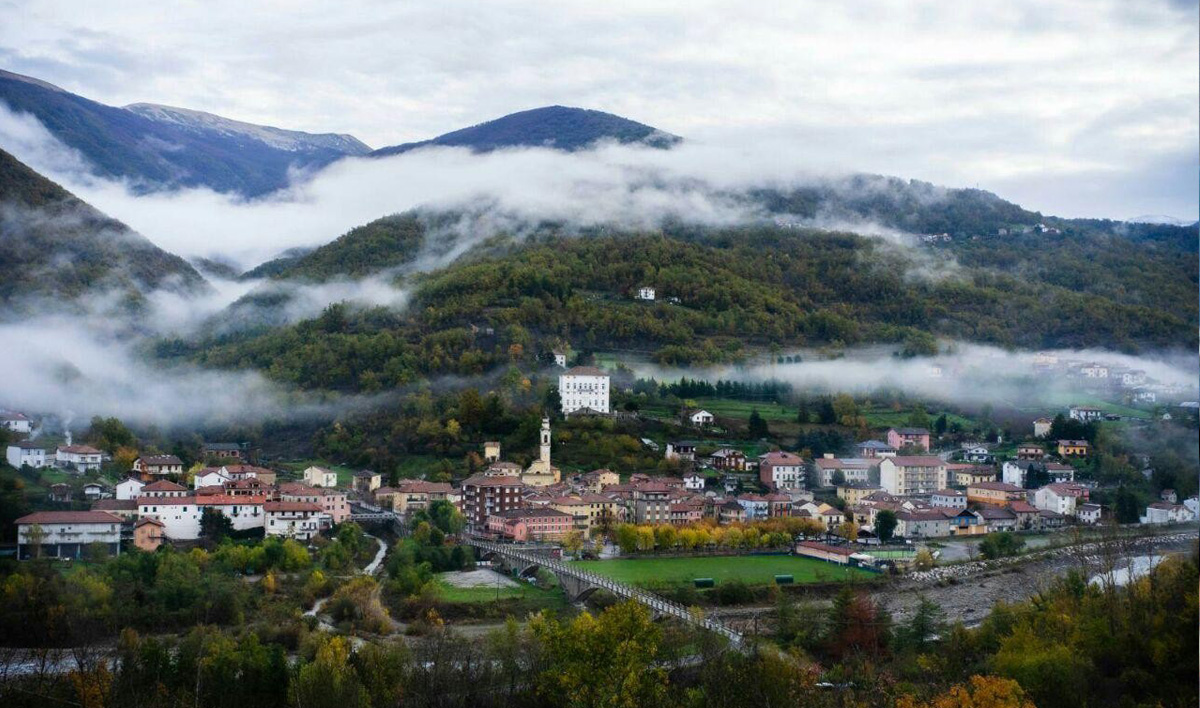 The Cabella SahajaUniverse exists in reality. It is situated in Val Borbera, a valley of the Borbera River, in the Apennine between Milan and Genoa, North Italia. Here is the heart of this Universe: Shri Mataji’s Castle, puja camp with hangar (Temple), school (Casaforme), Ashram (Centrassi) and Daglio summer camp. It coversCabellaitself and small communes nearby – Albera, Roccetta, and Cantalupo, which begun to populate by Sahaja yogis from all over the world in the 1990s.
According to Wikipedia (https://en.wikipedia.org/wiki/Cabella_Ligure), the population of CabellaLiguria, a small commune in the south of Piedmont, is slightly more half of the thousand. About half the inhabitants are Sahaja Yogis. They buy all free square meters of real estate for sale here. It is no wonder, then, that local ads are focused on locations close to the castle, which was bought by Shri Mataji, the founder of Sahaja Yoga.

It’s hard to die from starvation in Cabella. Every morning, at 6:30, two bakeries, two grocery stores, two farm shops, two coffee shops, and one cookery open their doors. They are open until 7:30 pm with a break from 12:45 to 15:45. On Sunday, if there are no visitors, they may close earlier.

Bar Italy is located near the central square of Cabella, on the right hand to the War Heroes Monument. In addition to fantastic coffee(this drink used to order here by Shri Mataji), it is famous for its large mirror decorated with a picture of a local landmark – the Castle. So every Sahaja Yogi has at least one photo with this miracle mirror. Along with the Bar Italy, or rather, in the yard behind it, there is an Il Patio pizzeria. Sahajis like to come here by the company.

In every sense Cabella is a Catholic town. The rhythm of its life is counted by the bells on the St. Lorenzo cathedral every quarter of an hour, and on Sundays, the mass in the cathedral gathers the inhabitants of the valley. That isn’t surprising that images of Madonnasappear in the streets of Cabella – in niches of fences and houses.

As a passionate player Cabella took part in various competitions among the towns. At first, the narrow streets were decorated with black and white photographs of people who once lived here, and for a while – with colored photos with local mountain flowers.No one already remembers if commune won, but Sahaja Yogis walking down these streets really enjoy all these photos. It’s like an open-air vernissage. Sahaja Yogis join to the local culture, giving it a taste of originality with their international community, appearance, and art. 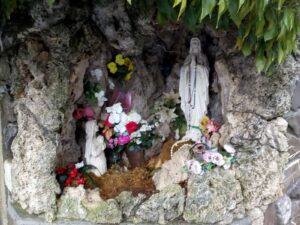 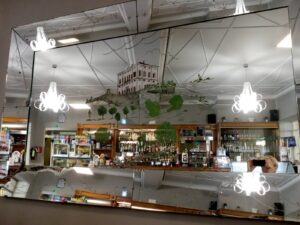 Sahaja Yogis have their own medieval castle. It is large and spacious. An official plaque on the entrance to it in Italian indicates that Doria Castle in 1991 was purchased by “Indian Principessa Srivastava”. In 2006, Sahaja Yoga founder Shri Mataji Nirmala Devidonated the building to her followers.

Today, the order in and around is supported by Sahaja Yoga residents of Val Borbera and volunteers from around the world who live in the Castle itself.

The walls of the Castle are painted white – atypical for this area. Here it is usual to see light pink. Sahaja Yogis love to retell the story of how Shri Mataji turned out to be right by insisting on the white of the façade. In her opinion, it best reflected the sunlight. However, in order to obtain the permit, she had to contact the Belle Artie region management directly, as the local commission required the standards to be followed. The Piedmont office confirmed the choice of Shri Mataji: it turns out that during the Renaissance, when the castle was built, the buildings were painted white.

From that time, Doria Castle whitewashes over Cabella. At night it is illuminated by lights and looks especially spectacular. 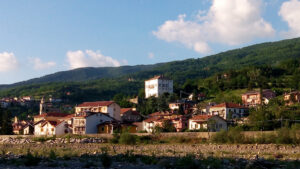 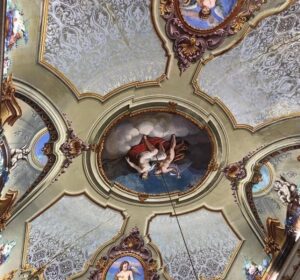 A hangar, or in a new way, a temple stands on the bank of the Borbera River near the former mill (Molino), which lies between CabellaLiguri and AlberaLiguri. Temple can accommodate many Sahajis. When it gathered more people than it can accommodate, especially in the warm season, its doors are opened and chairs placed on the court in front of it. Then the sound of “Om” rises from the lips of puja participants, and without hindrance rushes over the valley in the direction of the elephant mountain, which rises above the valley, and envelops, it seems, the whole Sahaj Universe of ValBorbera by a sense of peace.

The hangar was erected during the life of Shri Mataji. Here she communicated with her followers. This place is saturated with vibrations. Around it are lawns that Sahaji love to relax on.

During the pooja’s time, the flocks of Sahaja Yogis in the Indian national attire moves along the road from Cabella to Campsite, so it can sometimes seem like you’re in India. Local Sahaja Yogis, as well as those Sahajis who have come to the camp by car, love to stuff their vehicles with such pedestrians. Rather, because then their cars turn into little mobile Babylons where everyone tries to understand one another. If English does not help, then they move to a clearer Italian gesture language. 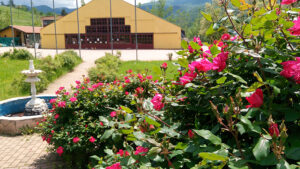 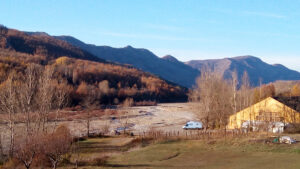 The river for Sahaja Yogis is the fastest way for footsoaking. Borbera’s stream quickly washes all the problems from their feet.

Borbera’s riverbed is ten times wider than its mainstream, and it spontaneously (the favorite sahaja-yogis’ word) chooses where exactly it would flow today. It can spill into several sleeves, designate a meeting point for itself, and, muttering with indignation at turns, humbly endure the strong stream of its other flow at places of meeting.

On its banks, even during the most crowded pujas, there is room for all yogis.

Shri Mataji liked to repeat that this mountain river has the power of the Great Ganga. She said that now when Sahaja yogis have a Castle over Berbera, it was not necessary to go to faraway India. Here at Cabella, the perfect set for spiritual growth is waiting for them. 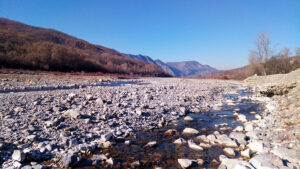 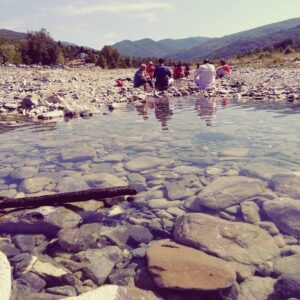