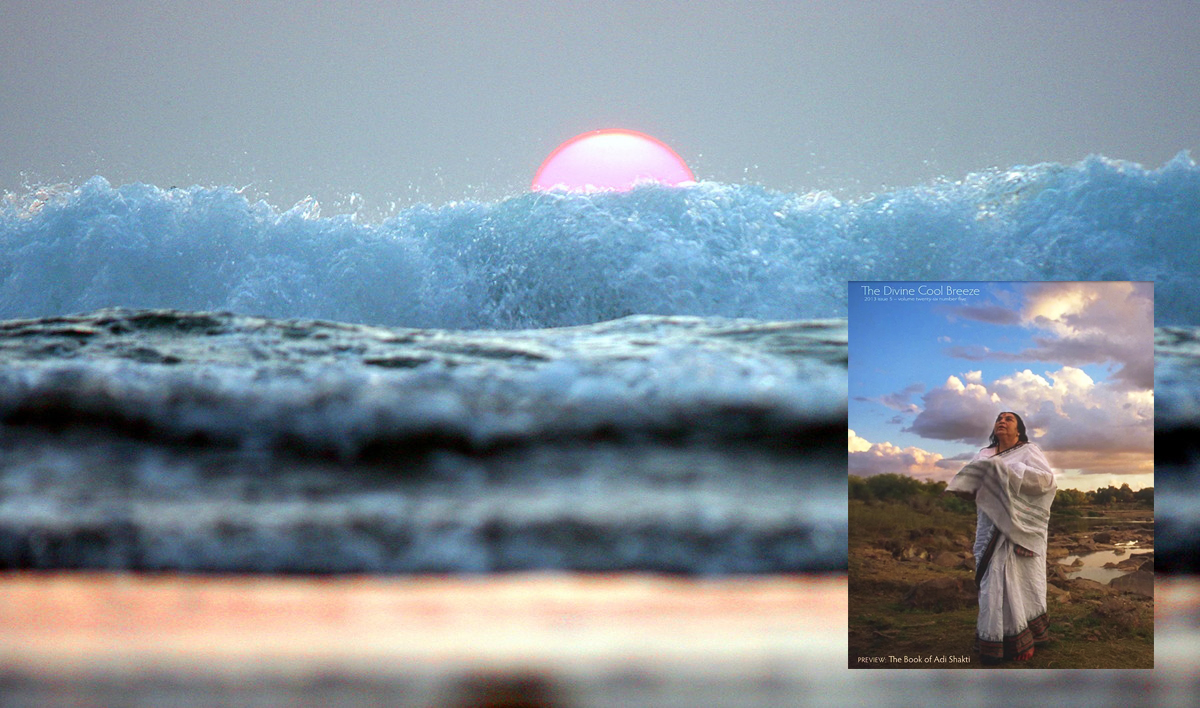 Since its publication in 2013, The Book of Adi Shakti has proven to be one of the foundational books in Sahaja Yoga. Carefully edited from unpublished manuscripts and illustrations, we have a book from Shri Mataji’s own hand. “I hope to write some book on Sahaja Yoga,” she once said. “The whole knowledge will be dawned upon you. You will have a meaning and you will understand.”

Creation is the eternal play of God in His form as Parabrahma, the absolute and all-containing Godhead. Parabrahma has two cosmic states: to be awake or asleep. When Parabrahma is in the awakened state His manifestation into creation takes place; when in the state of sleep, all His activities are dissolved into absolute zero (Shoonya) and the creation ceases to exist. This is a state of no motion and complete entropy. In this state all that is created, matter and non-matter, gets dissolved into one abstract energy which is Parabrahma. It is a state of existence, of just being, but it is like an object devoid of any light to reflect it. All human, inhuman, superhuman and non-human elements dissolve into Parabrahma when He stops the drama of creation being played uniquely for His enjoyment and amusement. In this way the cycle turns from the state of non-being of Parabrahma to His full manifestation as the creation itself.

Controversy has long raged about the starting point of creation. If one can grasp that eternity is the very nature of Parabrahma then this controversy can be simply resolved. When a person is in a state of consciousness, he is active, his personality manifests in his work and his talents are expressed. But when he is asleep, he is totally inactive, and the expression of his personality is withdrawn into his being.

The process of creation is comparable to the process of a seed sprouting to become a tree, and having attained full maturity, becoming a seed again. The Divine (Parabrahma) becomes the Primordial Seed (Brahma Beeja) before He starts His activity. Creation is the manifestation of this seed, which is like a perfect crystal with all its facets complete. 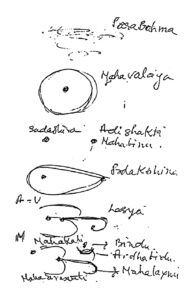 The First Stage of Creation

The Primordial Seed (Brahma Beeja) gets divided into two parts: one is the seed, the other is its germinating power. In the play of creation, the seed is the spectator, and its germinating power creates the spectacle. If we divide a crystal into its nucleus and its facets, this would be the concept. Such a thing unfortunately cannot be done in the material world. Thus the two identities of God (Parameshwara) and His Power (Maha Shakti) are formed. They exist as Supreme Being (Purusha) and as the Mother Power of Creation (Prakriti or Holy Ghost). They are the Primordial Father and the Primordial Mother, our Divine parents.

In His seed form Parabrahma is dormant, lying in this condition for millions of years (Kalpas). The separation of the one from the other only takes place after the awakening of Parabrahma from His state of cosmic sleep. In Figure I ‘S’ represents the Divine Seed.

With the waking of Parabrahma, His power pulses into activity, awakening a wave of Divine Love in the seed. This pulsation creates the Primordial Vibrating Sound (Adi Brahma Nad). It is as if the crystal dissolves into the Divine energy which emits circular waves around its nucleus. On all sides of the nucleus these waves deposit and create the Primordial Circle (Adi Valaya). Ultimately the Primordial Divine Power oozes out of the Divine Seed and into the Circle created. Thus in its first stage the sprouting Seed breaks into two components: One, the nucleus remains as the omnipotent and omnipresent (Purusha) witness or spectator, and two, the other part, God’s Power (Mahashakti), represented as the Primordial Circle (Adi Valaya), is the One who manifests the spectacle.