beyond that, the value of matter is that you can give love to others. 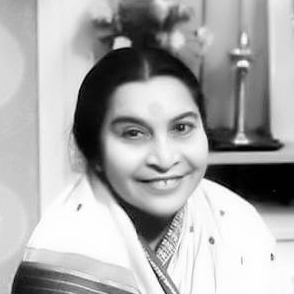 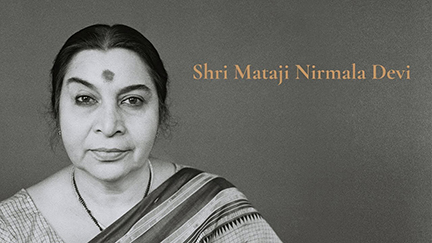 From Nirmala Srivastava to Shri Mataji

Nirmala Srivastava, known by the honorific title Shri Mataji Nirmala Devi, was born on the 21st of March, 1923 in Chhindwara, India. Her Christian parents, Prasad and Cornelia Salve, chose the name Nirmala, which means ‘immaculate.’

Her father, a lawyer and scholar, fluent in 14 languages, translated the Qur’an into Hindi. Her mother was the first woman in India to receive an honors degree in mathematics.

Her parents were actively involved in the struggle for Indian independence, and as a child, Nirmala frequently stayed with Mahatma Gandhi in his ashram. As a young woman, she too, joined the struggle for independence and was jailed for her participation in the Quit India Movement in 1942. She studied medicine at the Christian Medical College in Ludhiana and the Balakram Medical College in Lahore.

All the while, she deepened her perception of human nature, focusing her attention on the best way to help human beings rise to their highest potential. She came to understand that this transformation could only occur through the process of selfrealization, which is the activation of the inbuilt subtle energy present in all of us. The awakening of this energy was something she would experience herself, before dedicating her life to sharing it with others.

Shri Mataji established non-governmental organizations including a home for destitute women and children, several international schools, a health and research Centre, and an international academy promoting classical music and fine art. Her legacy lives on through these institutions as well as through Sahaja Yoga practitioners and meditation Centre’s established in more than 95 countries where Sahaja Yoga is taught, as always, free of charge.

She was laid to rest in India.

Shri Mataji has been recognized worldwide by several prestigious institutions for her selfless work and for the remarkable results of her spiritual teachings through Sahaja Yoga, a few of which are listed below.

Italy, 1986 Declared ‘Personality of the Year’ by the Italian Government.

New York, 1990-1994   Invited by the United Nations for four consecutive years to speak about the ways and means to achieve world peace.

St. Petersburg, Russia, 1993   Appointed as Honorary Member of the Petrovskaya Academy of Art and Science. In the history of the Academy only twelve people have been granted this honour, Einstein being one of them. Shri Mataji inaugurated the first International Conference on Medicine and Self-Knowledge, which became an annual event at the Academy thereafter.

Brazil, 1994   The mayor of Brazilia welcomed Shri Mataji at the airport, presented her with the key to the city and sponsored all of her programs.

China, 1995 Official guest of the Chinese Government to speak at the United Nations International Women’s Conference.

Cabella Ligure, Italy, 2006 Shri Mataji was awarded honorary Italian citizenship, which was followed by the unveiling of the foundation stone for the “Shri Mataji Nirmala Devi World Foundation of Sahaja Yoga”. This Foundation has its home in Cabella Ligure.

Series Vibrations, that is love, that is knowledge, that is joy

With love all kinds of creative action takes place. And as love will increase, your creativity will develop. Now this love of, that we talk of, this great love of God we talk of, we know it for definite through vibrations. People do not have vibrations, but still, they can feel the vibrations in a very unconscious way. All the great paintings of the world have vibrations. All the great creative works of the world have vibrations. Only those who have vibrations have been sustained by time – otherwise, all other things are destroyed. Vibrations, that is love, that is knowledge, that is joy. The first word is vibration, which you can call waves or Param (Absolute). …These vibrations are the Brahma – is the only Truth, the rest is all avidya, is all a maya, is just an illusion. Now the enlightenment, as the enlightenment you see here is of these lights, is manifested within you as vibrations, as Chaitanya, as light. So the Chaitanya itself is the light. 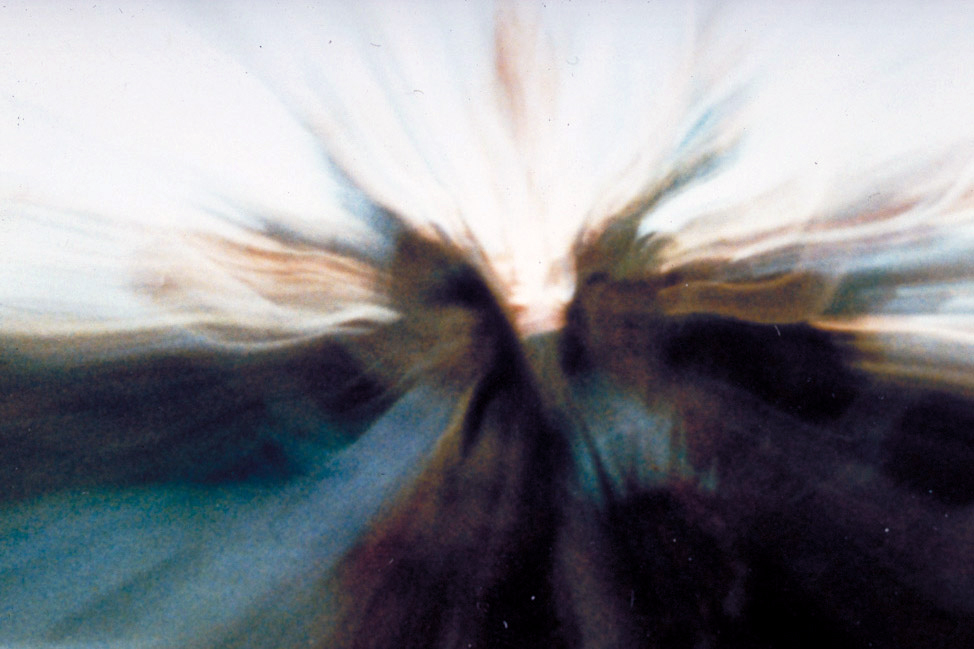 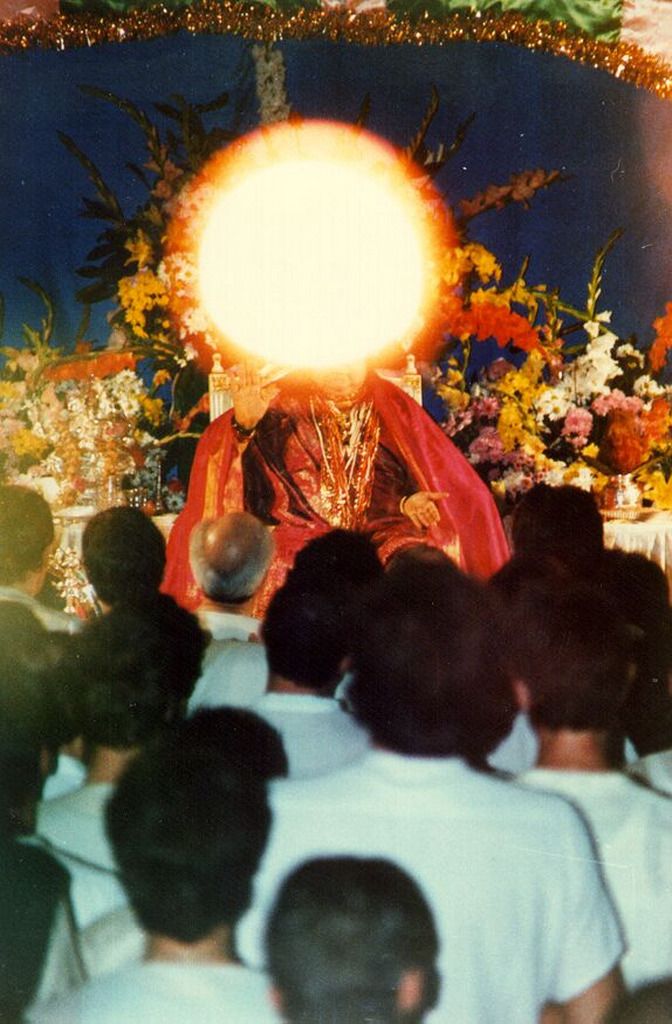 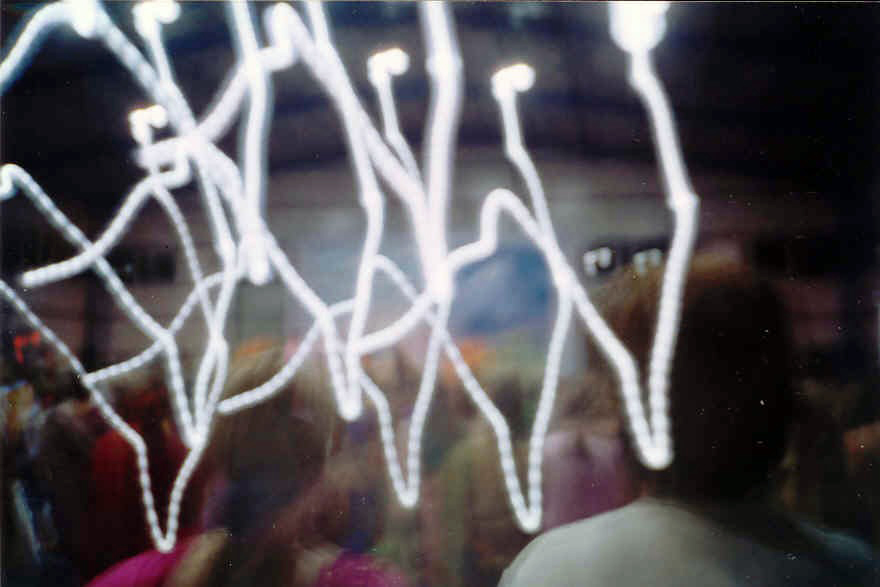 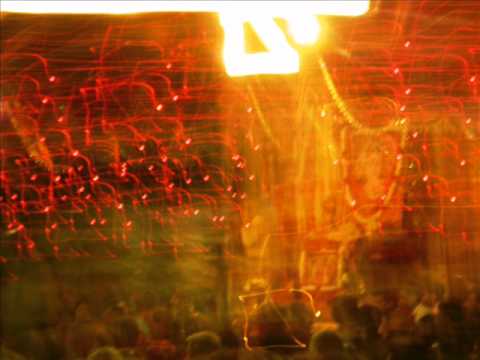 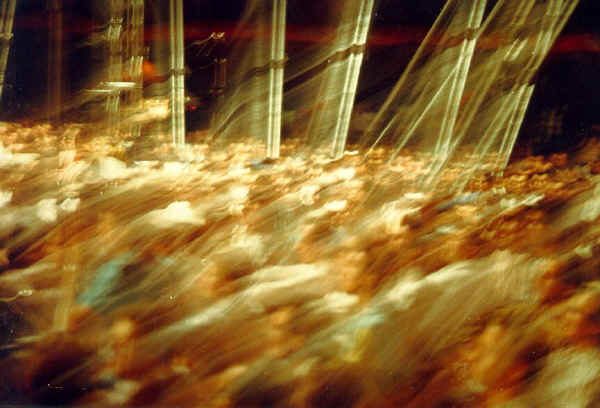 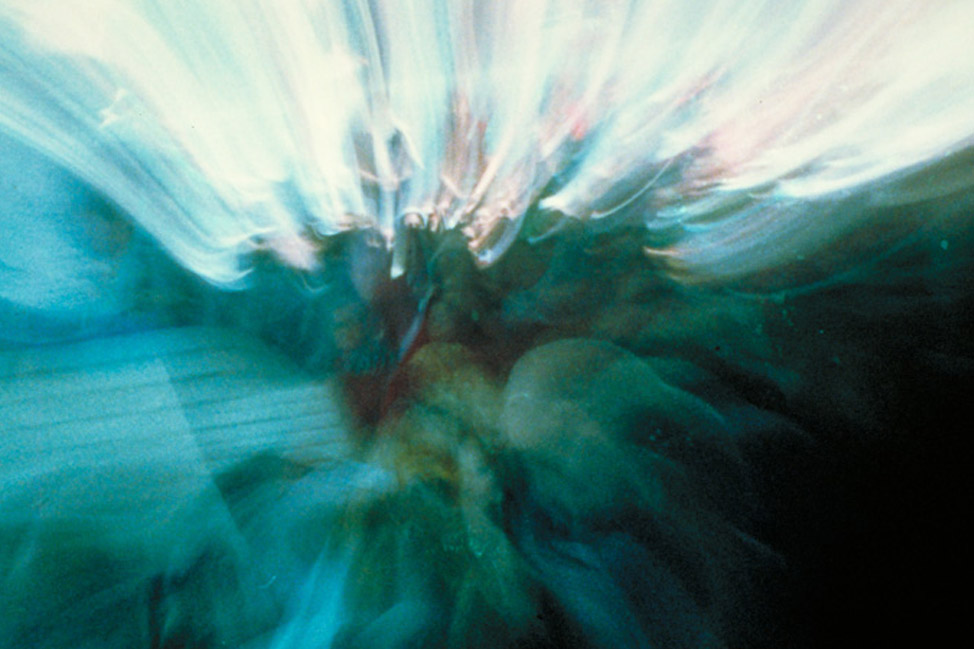 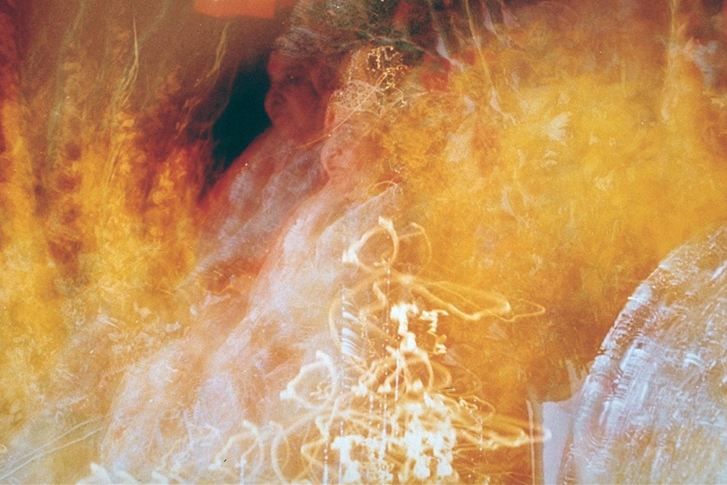 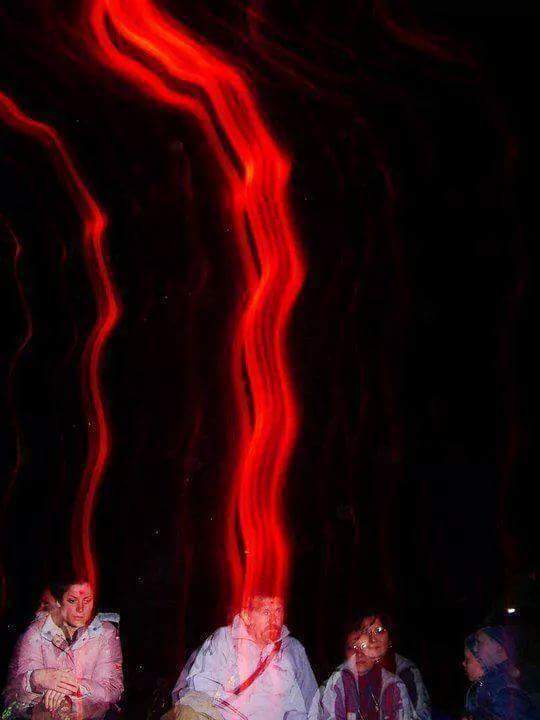 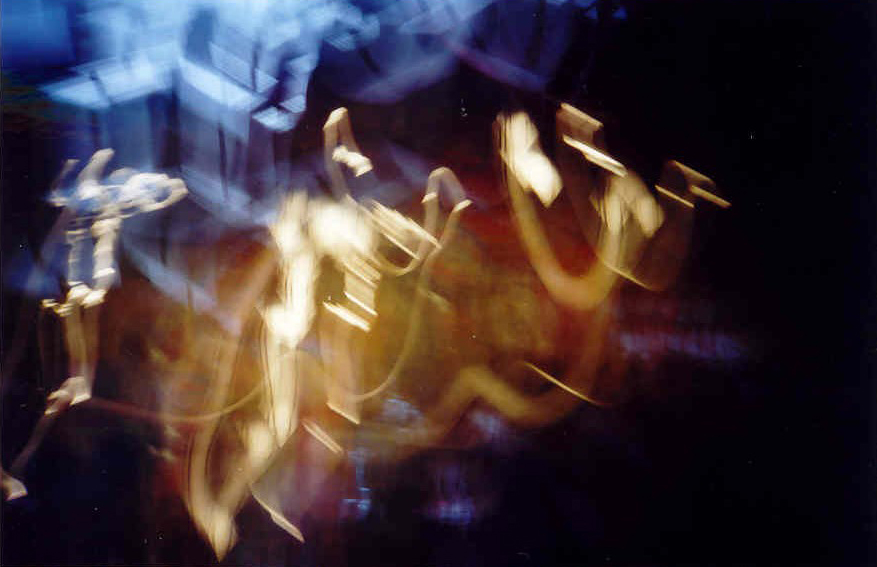 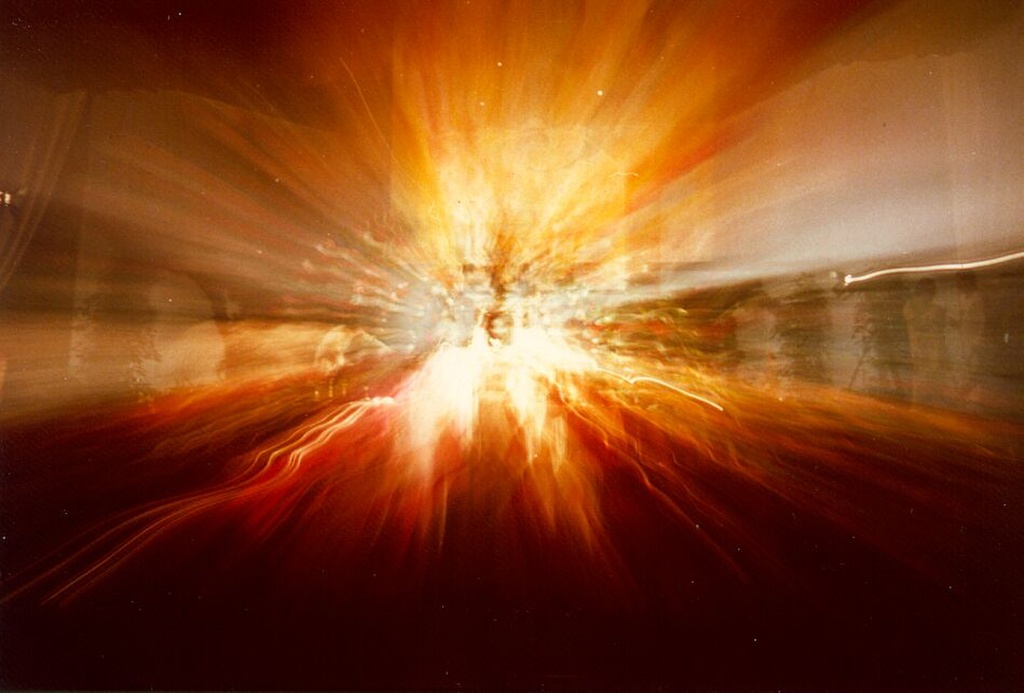 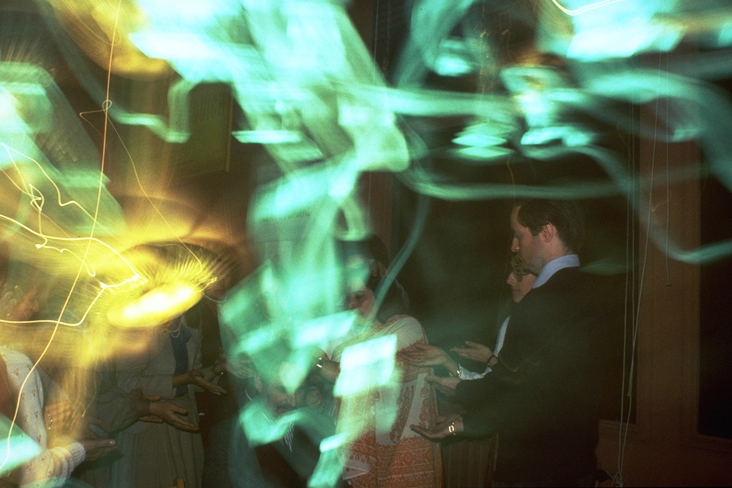 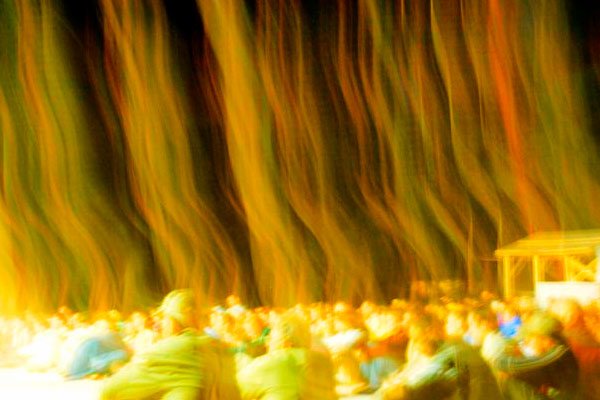 Shri Mataji dictated Her words onto cassette tapes in the late 70’s and early 80’s and it was typed up onto an early computer (there was no Microsoft Word in those days). It later was saved onto floppy discs and was more or less completed in its latest known form by 1982. 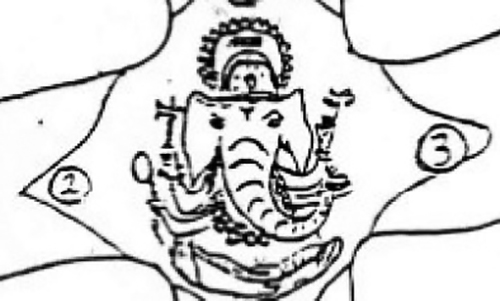 A Great Patron Of Music

A great patron of the arts and literature, Shri Mataji played an important role in reviving classical music. She found the vibrations of modern stone music very damaging to the chakras and the brain cells. People addicted to acid music often suffer from loss of memory and disorientation. Whereas the vibrations of classical music, composed by realised souls in praise of God are very soothing to the nervous system (chakras). After self realisation, a musician plays from the Sahasrara and the Kundalini rises. This produces a sympathetic effect on the listener, relaxing and elevating him. 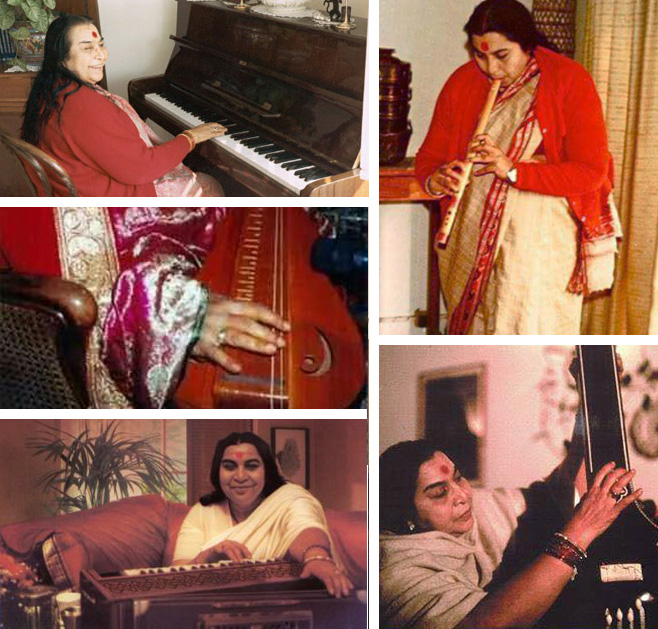 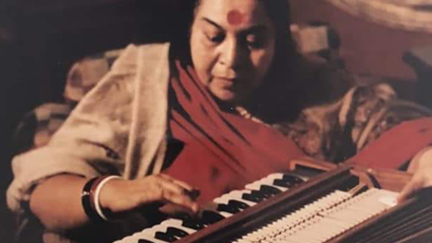 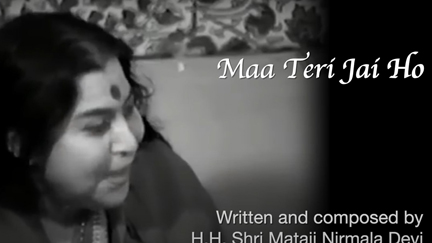 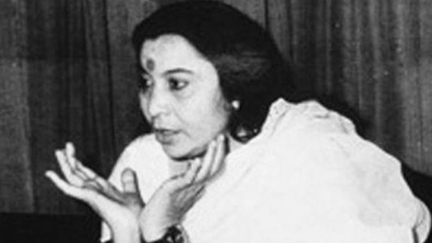 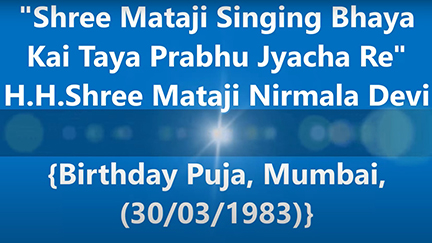 In 1961 Shri Mataji launched the "Youth Society For Films", in order to concentrate and harness the energy of the youth for national reconstruction and development. The main aim of the Youth Society For Films was to patronize and propagate purposeful and healthy entertainment with a view to infuse national, social and moral values in youth through entertainment, particularly through the powerful medium of films. She wrote a fascinating article which was published in the Souvenir - here is an extract; "Artists have to raise the public eye to their standards of taste, and not stoop down to the cheap demand of the public and thus surrender their freedom. This can be done by contacting educational and social institutions by the enlightened artists. Through articles in magazines and newspapers, the idea of such artists can be propagated. Through dramas, films and radio talks, people can be educated for the understanding of real art. Thus the dignity of art can be maintained. By coming in contact with the public at large through these societies, the social self of an artist will develop into a keener and more sensitive being. It will react to the slightest unrest in the nation, to the slightest imbalance in the society. If he sees a leper on the street, his heart will (pour out with such sympathy that through his art, he can create an atmosphere by which social workers, doctors, scientists and the people in charge of the state will be forced to think of some solution for the problem of leprosy. If an artist finds his countryman being unpatriotic or cowardly, he can, through others, create a deep impact on their minds. Such is the motivating force of an artist They are the loveliest flowers of the creation, sweetest dreams of the Creator and dearest parts of the human society. Perhaps, they do not know how they are loved, worshipped and followed by their spectators." Her idea caught the imagination of many young artists in Bombay who diverted their talent from vulgar cinema to artistic films. She Herself wrote a play "Rat pagal ho gai" (The Night has gone crazy). She was also a member of the Film Censor Board where She played an important role in protecting the innocence of Indian films during that time. 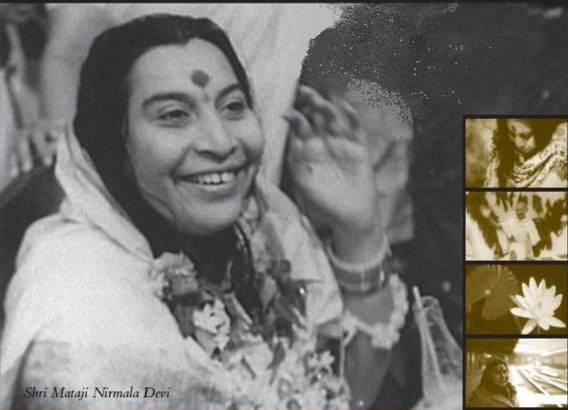 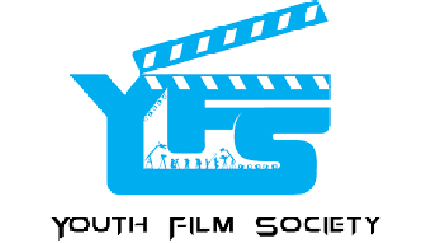 Shri Mataji’s fostering of the arts included strong support for the theatre. She encouraged a group of talented theatre performers to collaborate as the Theatre of Eternal Values. Formed in Ghent, Belgium in 1993, the ensemble still tours internationally, performing works by playwrights who inspire self-awareness and spirituality in their audiences. 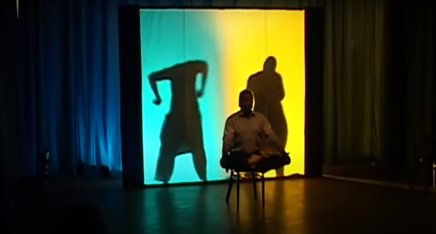 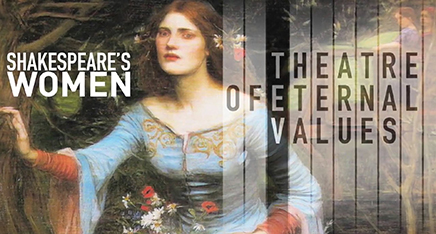 She set up a research farm in Pune. With vibrations, one sun-flower became over one foot in diameter and the agriculture department became interested in Sahaja Yoga methods. The Government of Maharashtra granted Her land at NeeraNarsingpur to experiment in Sahaja Yoga methods for producing non-hybrid seeds.   Shri Mataji loves flowers and plants and animals respond better to Her vibrations than human beings. Roses from her farm have won many prizes in flower shows. She feels the growth of all living beings on Her own parasympathetic nervous system. 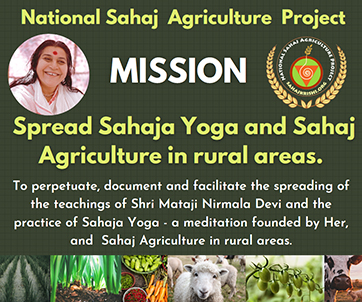 Shri Mataji is a great architect, although She has never studied architecture. She has personally drawn up the plans of two of the finest monuments as well as several Sahaja Yoga ashrams throughout the world. Her house in Pune, called Pratisthan, is an architect's dream. Another house in Noida near Delhi, is a marvel. She designed a sprawling ashram with a traditional courtyard in Konkan Bhavan, near Bombay and another in Delhi. Also a school in Dharamsala, is like a hill fort in the Himachali style. 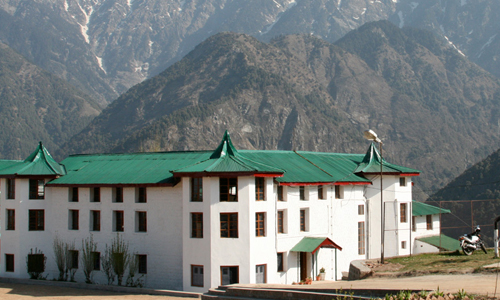 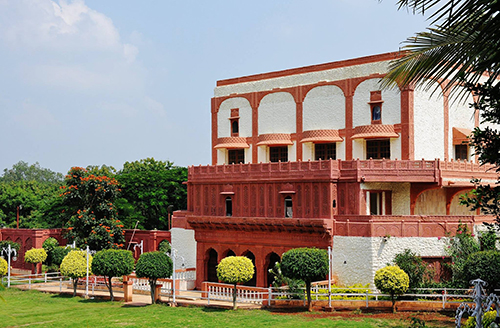 Sometimes Shri Mataji appears oblivious of Her body and She forgets to eat. It becomes necessary to persuade Her to eat something. She does not worry about what She eats but if a guest is invited then She produces a banquet for a King. Shri Mataji loves to cook for the yogis, and has even compiled a book of Her own recipes. 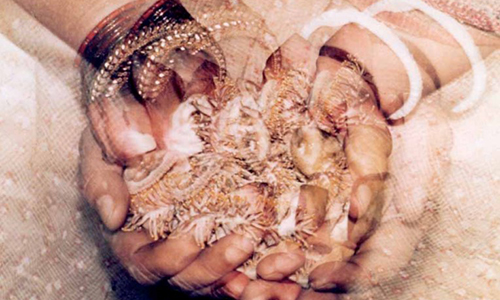